Home»Reviews»THE UNWINDING OF THE MIRACLE 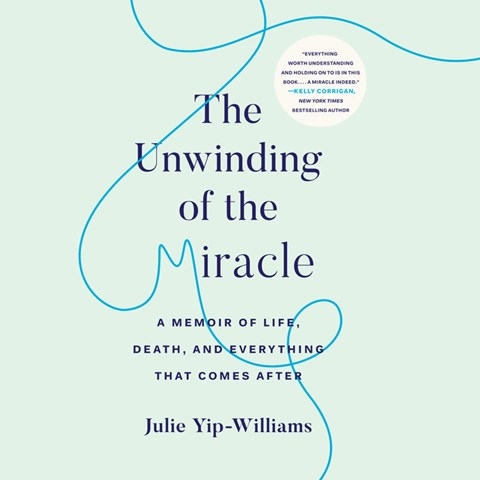 THE UNWINDING OF THE MIRACLE A Memoir of Life, Death, and Everything That Comes After

Narrator Emily Woo Zeller delivers one gut punch after another as she beautifully expresses the author's emotions while confronting her mortality. Yip-Williams cheated death as an infant when her grandmother ordered her parents to visit an herbalist to have her poisoned (he refused) and again when her family escaped North Vietnam on an overcrowded boat, but she can't beat aggressive colon cancer diagnosed at age 37. Zeller flawlessly voices Yip-Williams's fury at purveyors of false hope, grief at the prospect of leaving her beloved family, and even amusement at the idea of the "slutty second wife." Josh Williams, the late author's husband, delivers his own heartbreaking afterword in which he confesses the strain that disease brought to his marriage and the difficulty of carrying on without his beloved wife. A.B. © AudioFile 2019, Portland, Maine [Published: FEBRUARY 2019]