Home»Reviews»HOW TO LOVE A COUNTRY 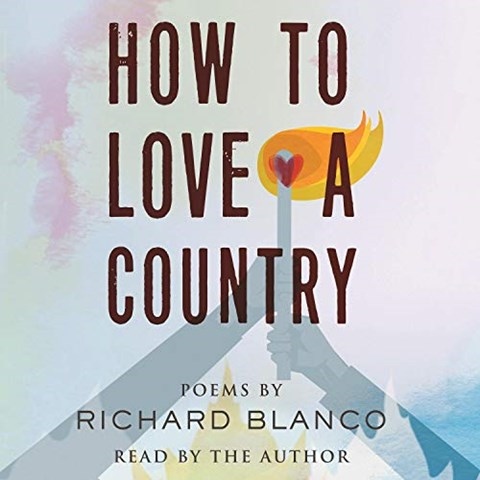 HOW TO LOVE A COUNTRY Poems

With a quiet but driving intensity, Richard Blanco delivers poems that speak to our times. He addresses the push-pull of his identity as a Cuban-American, confronts his own mortality (his father died at 55), and touches on national tragedies such as the Pulse nightclub and Parkland high school mass shootings and the Boston bombing. In the affecting "November Eyes," the author goes about routine errands in his small town and meets the eyes of his neighbors, who, he says, know that he is Latino and gay, on the morning after Trump's election. Blanco uses a few accents--for his mother and father, for a Cuban cab driver--and the occasional sound of a page turning or of the poet taking a breath makes the listening experience an intimate one. J.M.D. © AudioFile 2019, Portland, Maine [Published: MARCH 2019]