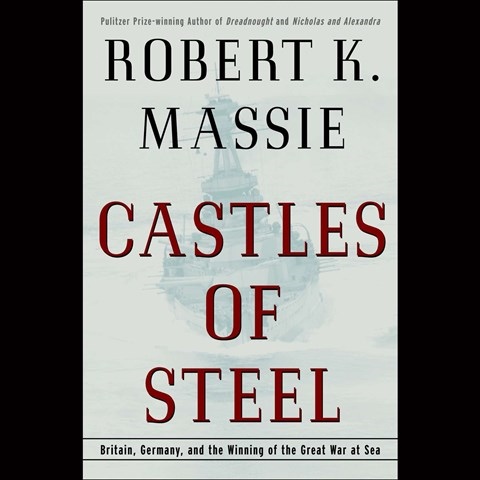 CASTLES OF STEEL Britain, Germany, and the Winning of the Great War at Sea

Building on the success of DREADNOUGHT, Pulitzer Prize winner Massie describes the role that sea power played in the Great War, WWI. The two greatest sea powers in the world faced one another. Great Britain was bent on maintaining its ocean supremacy; Germany was determined to reopen its vital commercial links. Careful attention is paid to the gigantic war- ships themselves and to the personal interactions of the leaders: politicians (Churchill, the Kaiser), admirals (Jellicoe, Scheer), and many others. The battles are described in meticulous detail. The writing is lucid, and the narration, by Brit Richard Matthews, is precise and compelling. Matthews presents American and German accents here and there--and succeeds. D.R.W. © AudioFile 2004, Portland, Maine [Published: AUG/ SEP 04]