Home»Reviews»THIS IS HOW YOU LOSE THE TIME WAR 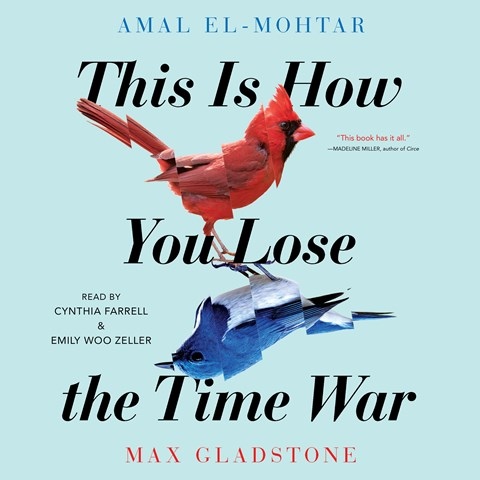 THIS IS HOW YOU LOSE THE TIME WAR

Emily Woo Zeller and Cynthia Farrell's dual narrations emphasize the divergent personalities of two time-traveling protagonists. Coolly portrayed by Farrell, Red sneers as she sees Blue, her foe, across a burning field. Red realizes that her attempt to alter the future was foiled by Blue, an agent of the opposition in an ongoing war that moves through time. Then, Red receives a letter from Blue--read in a taunting tone by Zeller--and the agents begin a cryptic correspondence as they sabotage each other's missions. The two narrators deliver the rich and lyrical letters with increasing passion as each agent falls in love with her enemy. We hear their pain as they must choose between betraying each other--or their agencies. Listen, then listen again to unravel this intricate story, beautifully narrated. E.E.C. © AudioFile 2019, Portland, Maine [Published: JULY 2019]