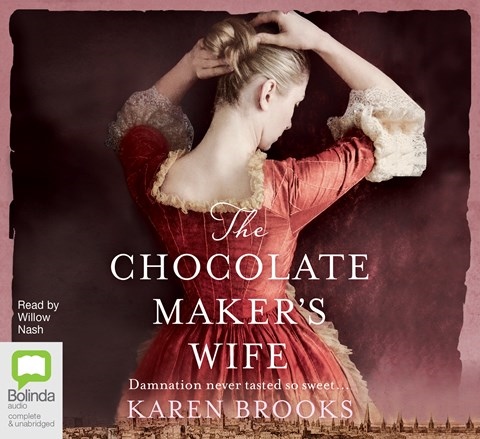 Narrator Willow Nash flawlessly re-creates the details of 1600s England, including descriptions of the Plague, the Great Fire, and the introduction of delectable chocolate as a beverage. Seventeen-year-old Rosamund Tomkins is abused by her stepfamily until wealthy Sir Everard Blithman marries her. Listeners accompany her as she adjusts to London life, learns to read, and manages a chocolate house frequented by wealthy men. But soon, Nash captures Rosamund's innocence being transformed as Everard reveals his cruelty. She excels at presenting realistic glimpses of the chocolate drinkers, including real-life historical figures who privately criticize the government. Gossipy Samuel Pepys's wit is deftly portrayed, along with his brilliant observations. Most compelling is Nash's delivery of scenes in which a more mature Rosamund confronts the slave trade and treatment of the poor. S.G.B. © AudioFile 2019, Portland, Maine [Published: SEPTEMBER 2019]