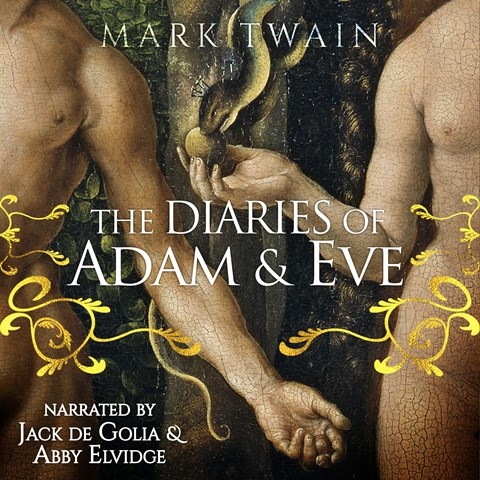 THE DIARIES OF ADAM & EVE

Mark Twain's amusing and moving retelling of the Garden of Eden story is delightfully presented in diary form by narrators Jack de Golia, as Adam, and Abby Elvidge, as Eve. De Golia's Adam especially captures Twain's humor. For example, he finds the idea of just one day of rest a puzzle, as he'd previously had six others each week. He's initially frustrated by Eve's talkativeness, habit of giving names to all creatures ("though they never come when you call them"), and need for companionship. Elvidge's Eve movingly expresses Eve's joy of discovery with each new creature and her puzzlement over the male mind. The audio ends movingly after Eve's death as Adam comes to realize that "wherever she was, there was Eden." S.G.B. © AudioFile 2019, Portland, Maine [Published: AUGUST 2019]