Home»Reviews»THE MYSTERIOUS BENEDICT SOCIETY AND THE RIDDLE OF AGES 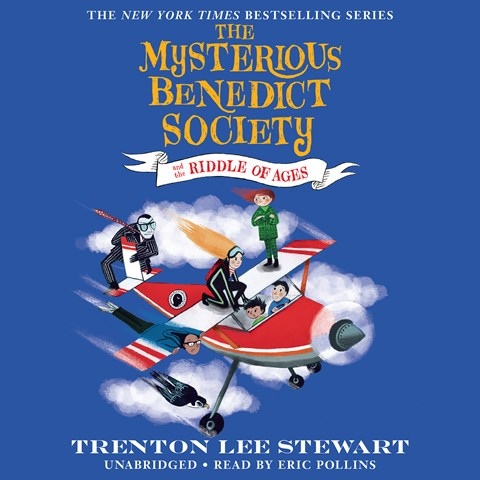 THE MYSTERIOUS BENEDICT SOCIETY AND THE RIDDLE OF AGES Mysterious Benedict Society, Book 5

When a beloved book series must change narrators, it can sometimes be disconcerting, but Eric Pollins admirably takes the reigns from the late Del Roy, who narrated the first four books in this series. In Book 5, the members of the Mysterious Benedict Society are older; Reynie, Kate, and Sticky are on the verge of adulthood when they and Constance reunite for a new adventure. A 5-year-old telepath named Tai, voiced with raspy, wide-eyed innocence, joins them to round up Ledroptha Curtain's 10 dangerous henchmen who have escaped from prison. Pollins imbues Mr. Benedict with gruff warmth, and Curtain's voice drips with arrogance. This cozy mystery full of puzzles and wordplay begs for the whole family to settle in and listen together. S.C. © AudioFile 2019, Portland, Maine [Published: SEPTEMBER 2019]