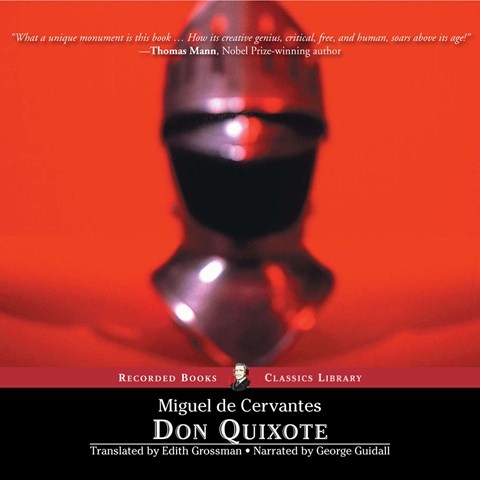 Only Proust’s IN SEARCH OF LOST TIME, the longest and most complex novel ever written, offers more daunting challenges for the narrator than this, the first modern novel. Every culturally literate individual knows who the Don and Sancho Panza are, though few moderns have read the two hefty, meandering, uneven tomes from Shakespeare’s era that relate their adventures. Begun as a satire of the Arthurian romances popular at the time, it ends as a tragicomic portrait of two infuriating yet endearing archetypes, embodiments of the futile grandiloquence of human aspiration. One must drive home the stale topical references, the remote sixteenth-century Castillian milieu, the implicit values of an alien society. Moreover, for the total to have coherence, one must convey the development, not only of the two antiheroes, but of the author and his conception. The incomparable George Guidall vivifies the entire Don Quixote in the new, acclaimed translation by Edith Grossman. His is the perfect American-language voice for Cervantes: mature, gravelly, and learned. As a performer, he has the intelligence, imagination, humor, and depth required to convey the values touched on above. Further, he provides a subtle and appropriate Spanish melody to the text, a sense of fun, and the pathos that has made this book immortal. Even so, the book is too much for all but the most patient listener. This reviewer recommends that those turning to the Don for the first time first hear the delightful abridged reading by Andrew Sachs for a sense of the overall schema (and a lot of hearty laughs); then put the Guidall version in the player for the full flavor of the whole. Doing so will provide a fuller and more satisfying Quixote than any number of footnoted print editions. Y.R. 2004 Audie Award Finalist, Winner of AUDIOFILE Earphones Award © AudioFile 2004, Portland, Maine [Published: JUN/ JUL 04]