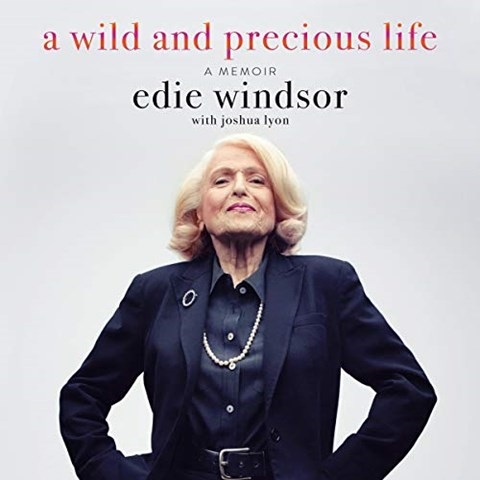 A WILD AND PRECIOUS LIFE A Memoir

Joshua Lyon, coauthor of this audiobook, describes it as a memoir/biography hybrid. Lyon delivers the introduction with rich appreciation for his coauthor and subject, the late Edie Windsor, who was a major figure in the gay rights movement. Donna Postel takes over the main narration, shepherding listeners through Windsor's early years in a middle-class Jewish neighborhood in Philadelphia; her lengthy relationship with her wife, Thea; and her role as lead plaintiff in the Supreme Court's decision to legalize same-sex marriage. Postel's intimate tone reveals Windsor's feisty, smart, and determined nature. At the end of each chapter, Lyon returns to narrate additional recollections of Edie's family and friends as well as insightful reminiscences on mid-twentieth-century gay life. This engaging and thoughtful listen deserves a wide audience. M.J. © AudioFile 2019, Portland, Maine [Published: OCTOBER 2019]