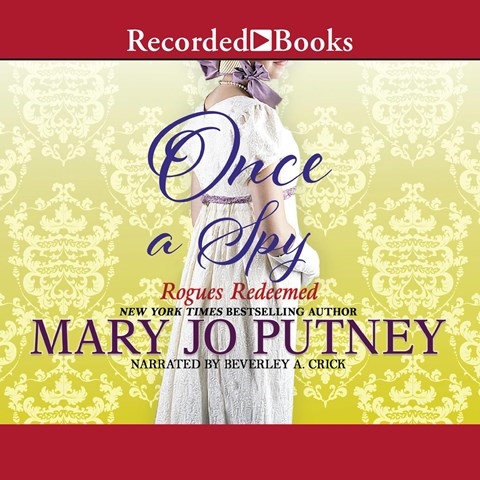 ONCE A SPY Rogues Redeemed, Book 4

by Mary Jo Putney | Read by Beverley A. Crick

A superb performance by narrator Beverley A. Crick makes even the most credibility-stretching events in Putney's fourth Rogues Redeemed series delightful listening. Her voice is lovely, and her ability to slip between British and French accents and classes is impressive. Simon Duval, former British intelligence officer, and his cousin's widow, Suzanne, met once long ago and formed a bond of friendship. After Napoleon's abdication, Simon and Suzanne agree to an unusual marriage based on companionship. Suzanne has been mistreated by men, and Simon believes his capacity for love has been destroyed by the war. Crick allows their blossoming romance to unfold slowly amid the turmoil of Napoleon's escape from Elba and return to power. She handles subplots, dangerous liaisons, history, and backstory with enthusiasm. S.J.H. © AudioFile 2020, Portland, Maine [Published: MARCH 2020]