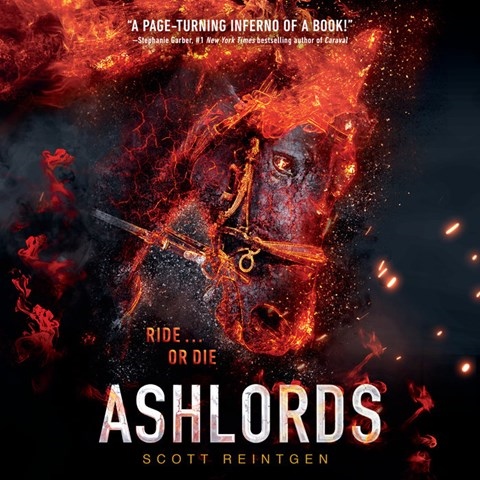 An ensemble of narrators presents the first in a series set in a dystopian world in which Ashlords rule. Three teens compete, riding magical steeds that rise from ashes at dawn and die in flames in the Ashlords' annual race. All of them are at an unfair advantage and have stakes more important than the prize money. Andrew Aiden mixes a drawl and a tone of determination to portray Adrian, the cowboy-like son of a revolutionary. Rebecca Soler expresses Imelda's tinges of desperation as a poor entrant as well as her strong desire to crush the oppressive system. Lauren Fortgang dramatizes Pippa's pride, which is encouraged by her parents, former Ashlord champions. Each narrator expresses the rising tension as the competitors fight for triumph and for their lives. Neil Hellengers enters at the end, giving an overall perspective and a view of what's to come. S.W. © AudioFile 2020, Portland, Maine [Published: FEBRUARY 2020]