Home»Reviews»A LONG PETAL OF THE SEA 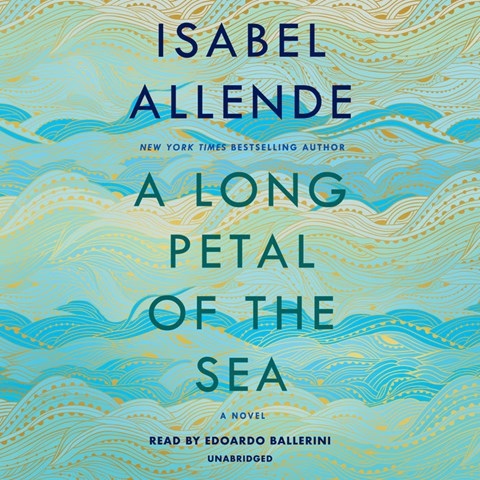 A LONG PETAL OF THE SEA

Edoardo Ballerini's sensitive narration of Isabel Allende's lyrical prose touches the heart. He heightens the plight of Victor Dalmau, his mother, and his brother's pregnant widow, Roser. This intense saga spans nearly 60 years, following the Dalmaus as they are caught in the upheaval of the Spanish Civil War, when Franco's Fascists overthrow the government. Ballerini adds drama and emotion as the family flees Spain, endures a brutal trek across the mountains to France, and copes with inhumane conditions in a French concentration camp. Eventually, with the help of poet Pablo Neruda, they escape to Chile, where they live for many years until another repressive government forces them to flee again. Ballerini expertly delivers Allende's reminder of how delicate the boundary is between precious freedom and insidious tyranny. Powerful listening. S.J.H. Winner of AudioFile Earphones Award © AudioFile 2020, Portland, Maine [Published: FEBRUARY 2020]