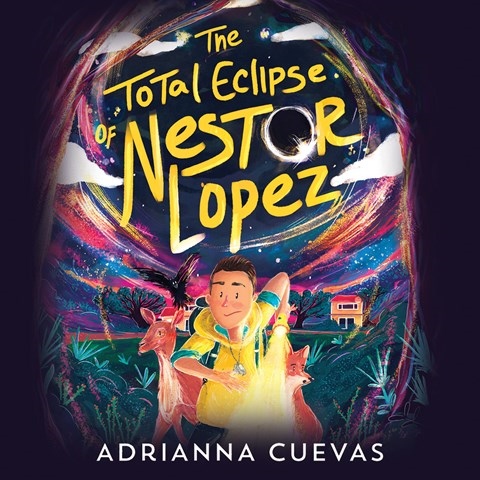 THE TOTAL ECLIPSE OF NESTOR LOPEZ

Anthony Rey Perez narrates this story of a Cuban-American boy who has a secret ability to communicate with animals. When sixth-grader Nestor moves in with his abuela while his father is deployed in Afghanistan, he discovers there is something creepy lurking in her woods. As Nestor and his new friends investigate, they discover that an evil shape-shifting witch has been abducting animals and that Nestor's abuela is somehow involved. The mystery comes to a climax during a solar eclipse, when Nestor uses his powers to save the animals and his friends. Perez's fast-paced narration and distinct voices for each animal--from a sinister snake to an obnoxious bird--enliven this vibrant audiobook based on Panamanian and Costa Rican folklore. S.C. © AudioFile 2020, Portland, Maine [Published: JUNE 2020]