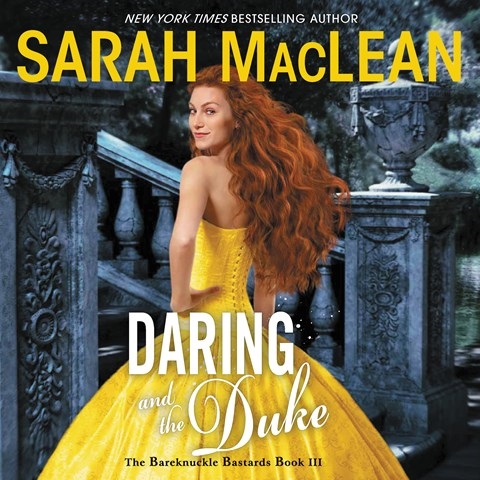 DARING AND THE DUKE The Bareknuckle Bastards Book 3

Narrator Justine Eyre is back with the final audiobook in MacLean's Bareknuckle Bastards trilogy. Ever since he betrayed her 20 years ago, Grace, the Queen of Covent Garden, has successfully avoided Ewan, Duke of Marwick. Now that he's found her, Ewan is determined to do whatever it takes to make her his duchess. Eyre's prolific catalogue of audiobook narrations is heavy with historical romance, including the other titles in this series. She provides a serviceable, albeit fast paced and excitable, performance, mostly keeping the listener's attention. However, at times the male characters sound too similar to easily discern who is speaking. Additionally, the characters' various accents are inconsistent. A.L.S.M. © AudioFile 2020, Portland, Maine [Published: AUGUST 2020]