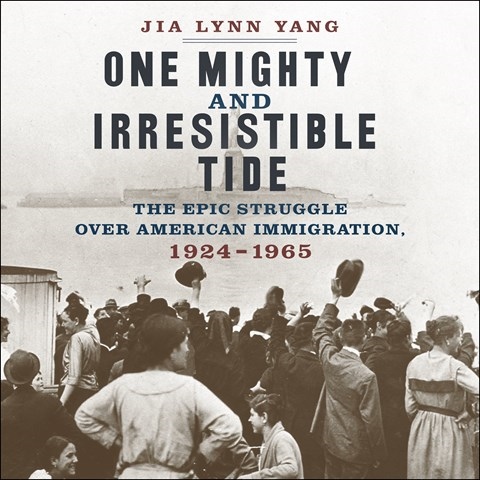 ONE MIGHTY AND IRRESISTIBLE TIDE The Epic Struggle over American Immigration, 1924-1965

Narrator Laural Merlington conveys a sense of urgency as she recounts the contentious history of immigration reform in twentieth-century America. The years between 1924 and 1965 brought unprecedented change to immigration policies, moving from the overtly racist Immigration Act of 1924 to the Immigration and Nationality Act of 1965, which finally made it possible for Asian, Latin-American, African, and Middle Eastern immigrants to find a place in this country. Merlington clearly delivers author Jia Lynn Yang's meticulously researched history, displaying remarkable restraint as she allows the ugliness of anti-immigrant sentiment and the racist political machinations of the era to speak for themselves. By injecting just the right amount of momentum and liveliness, Merlington creates a thoroughly engaging listen on an all-too-timely topic. S.A.H. © AudioFile 2020, Portland, Maine [Published: JULY 2020]