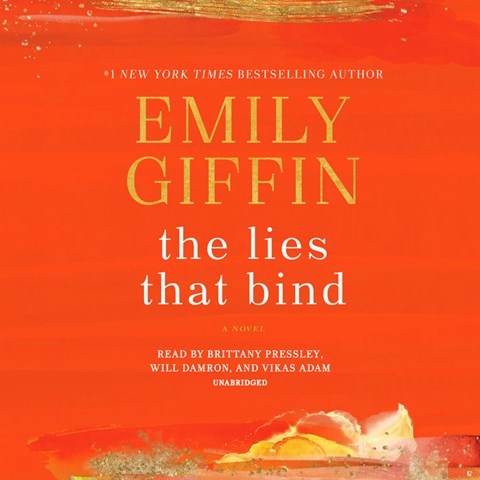 THE LIES THAT BIND

A meeting at a New York City bar in 2001 has Cecily, steadily voiced by the talented Brittany Pressley, falling for Grant, whose mysterious nature is rendered in a somber and tender tone by narrator Will Damron. Then Grant goes missing after 9/11, and Cecily discovers she's not the only one looking for him. This development has her questioning how well she knew him--and how well anyone can ever know another. Vikas Adam as Scottie, Cecily's gay bestie, is loud, fast paced, and confident, providing levity. Simon Katz is initially smug and angry as Cecily's ex-boyfriend, but his terse and short sentences give way to a soft and patient voice. Pressley's skill is highlighted by a chilling eyewitness account of the 9/11 attacks in which her voice is shaking and she sounds near hyperventilation. A.L.C. © AudioFile 2020, Portland, Maine [Published: AUGUST 2020]