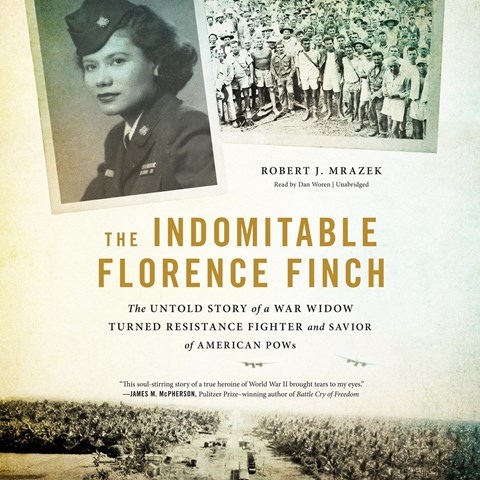 Adopting a no-nonsense tone, Dan Woren narrates this fascinating biography of Filipina Florence Finch (aka Loring May Ebersole, 1915-2016), the Mestiza daughter of an American soldier of the Spanish-American War. The work focuses on her resistance work under the Japanese occupation of Manila during WWII, for which she was awarded a Presidential Medal of Freedom. Woren effortlessly shifts from English narrative to Spanish or Japanese terms in the midst of this engrossing story. Steadily and unfailingly, Woren's narration follows the action in the Pacific Theater--from the Bataan Death March, Corregidor, and Manila to prisoner-of-war camps and Japanese prisons, with their associated atrocities. Throughout, Woren's performance is unemotional, rarely reflecting the brutality of events and the hopelessness of the prisoners during this little-known chapter of history. M.B.K. Winner of AudioFile Earphones Award © AudioFile 2020, Portland, Maine [Published: OCTOBER 2020]