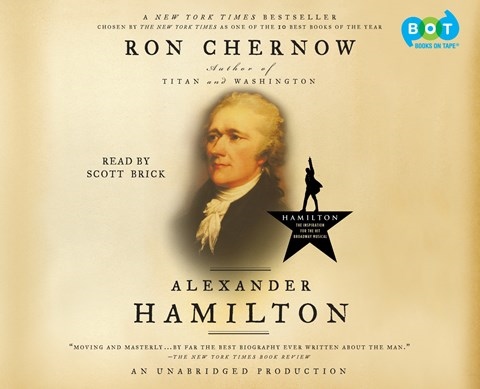 From the age of 19, when he was aide-de-camp to General Washington, to age 49, when he was killed in a duel with Aaron Burr, Alexander Hamilton was one of the giants of Revolutionary-era America. As Chernow describes in this biography, Hamilton, as Secretary of the Treasury, designed the financial system that became the hallmark of our capitalist democracy. He was also the primary author of the Federalist Papers and exponent of the federalist point of view, in opposition to the Republican position espoused by Jefferson. (All biographies of Hamilton paint Jefferson in dark tones; this one is relentlessly savage toward the Virginian.) Scott Brick delivers a highly professional, straightforward narration that holds one’s interest throughout. Straight narrative can become boring, and Brick is never that. Nor does he become lazy in the course of 36 hours. His voice and evident interest are fresh throughout. R.E.K. © AudioFile 2004, Portland, Maine [Published: OCT/ NOV 04]