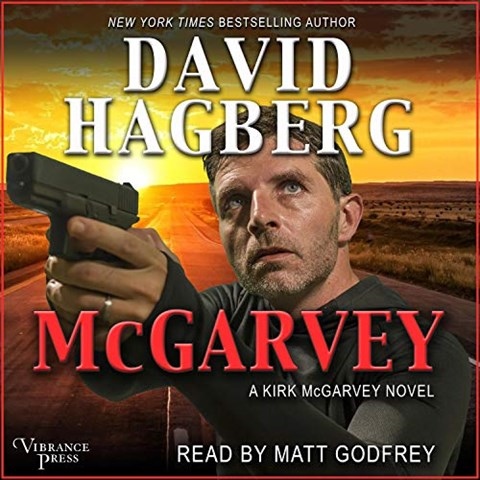 MCGARVEY The World's Most Dangerous Assassin

Matt Godfrey uses all his narration skills in the twenty-fifth spy adventure of Kirk McGarvey, a grizzled CIA agent. Godfrey's careful pacing delivers the straightforward language of a story full of secrets. The action shifts frequently between the deaths of McGarvey's parents' twenty-five years earlier and the unpredictable present. Godfrey uses lighter tones for the women in Mac's life and a sometimes quavering voice for his best friend and boss, Otto. A perky-voiced AI sounds flawlessly human in sharp contrast to the nervous and softly accented Russian assassins. Listeners may find the sophisticated interaction between the AI and the CIA operative the most exciting segments of this somewhat ho-hum thriller. M.B.K. © AudioFile 2021, Portland, Maine [Published: APRIL 2021]