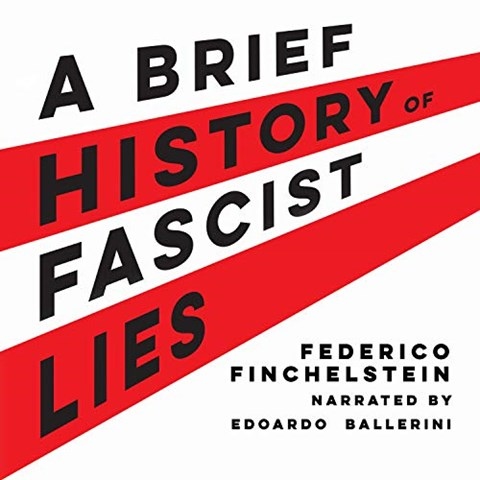 A BRIEF HISTORY OF FASCIST LIES

The lucid and accessible discussion of the connection between fascism and lying made by Argentine historian Federico Finchelstein comes to listeners through the equally clear and agile narration of Edoardo Ballerini. International in scope and spanning the twentieth century’s infamous fascist leaders and their followers—Argentina’s Lugones, Spain’s Franco, Italy’s Mussolini, Germany’s Hitler, among others—along with the populist and fascist-leaning Argentine Peron and the 21st century’s own populist super-liar, Trump, the audiobook calls upon Ballerini to demonstrate his ease with a broad range of languages to smoothly pronounce names and terms. His pacing, and the author’s writing, prevent any sense of drag, making this short audiobook rigorous enough to engage politically educated listeners as well as students eager to find expert guidance in developing historical understanding. F.M.R.G. © AudioFile 2021, Portland, Maine [Published: JANUARY 2021]