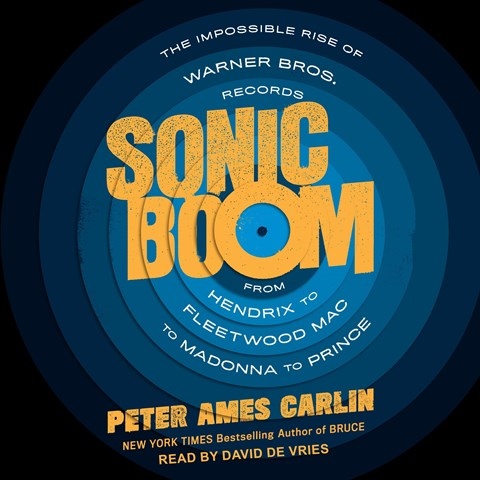 SONIC BOOM The Impossible Rise of Warner Bros. Records, from Hendrix to Fleetwood Mac to Madonna to Prince

Narrator David de Vries's fluid and authoritative but pompous style closely matches this inside look at the evolution of Warner Bros. Records. Sadly, the fascinating early history of the label, which began in 1958, is all but entirely ignored. Instead, the business of the music industry and the creativity of artists such as Van Morrison, Fleetwood Mac, Alice Cooper, and Paul Simon as a solo act, among others, are explored in an eclectic, complete, and gossip-free style. Briefly addressed is Warner's 1963 purchase of the label Frank Sinatra created when he left Capitol Records, thereby creating Warner/ Reprise Records. While there is too much of the old-fashioned network anchorman to de Vries's delivery, this audiobook offers much enlightening history for fans and students of recently popular rock music. W.A.G. © AudioFile 2021, Portland, Maine [Published: FEBRUARY 2021]