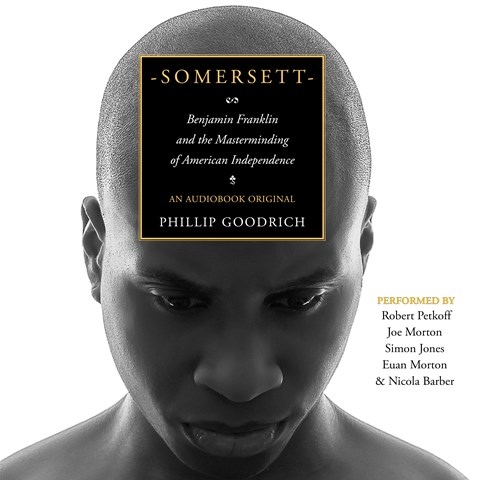 SOMERSETT Benjamin Franklin and the Masterminding of American Independence

With a sense of unbound curiosity, narrator Robert Petkoff narrates this fascinating account of the background and backroom dealings that crafted and sustained the American Revolution—from its financing to its persuasive pamphlets and battle plans. The story centers on Benjamin Franklin, who dedicated the second half of his life to wresting the Colonies from England. Along the way, a 1772 judgment by the Earl of Mansfield, voiced with perfect British authority by Simon Jones, gave a single enslaved man, James Somersett, his freedom, creating a devastating dichotomy between abolitionist New England’s creed and what the South viewed as “property rights.” Franklin hoped that the fledgling U.S. Constitution would resolve the issue of slavery. In his afterword the author provides more details on why it did not. Essential listening. B.P. Winner of AudioFile Earphones Award, 2021 Best Audiobook © AudioFile 2021, Portland, Maine [Published: JULY 2021]