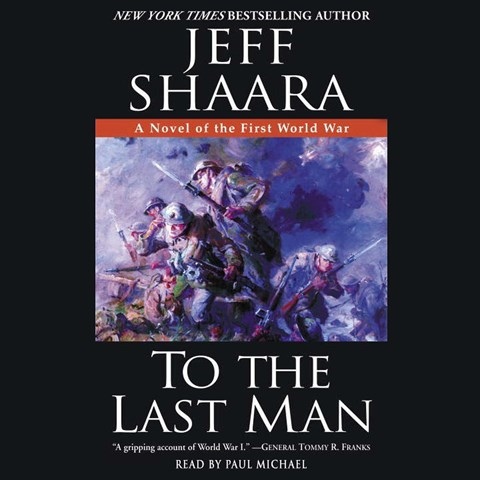 TO THE LAST MAN

Seen from the eyes of the fighting men, the author's engaging novel captures the Great War's infamy for futility and needless death. Told in an unconventional style using abundant short phrases and incomplete sentences, the scenes of exploding action and personal tragedy contain riveting detail. Using skilled accents in four languages--American and British English, German, and French--Paul Michael develops his many characters' individual personalities. Since the narrative switches among concurrent, separate stories, Michael's changing accents magnify our ability to follow and enjoy the novel. The compelling production transports listeners to the suffering of the entrenched infantry living in lice-filled uniforms and the pilots who stood in their cockpits to reach the firing mechanism of their machine guns. In a thick German accent, the historic Red Baron comes to life in a way that no printed page could ever portray. J.A.H. Winner of AudioFile Earphones Award © AudioFile 2005, Portland, Maine [Published: APR/MAY 05]