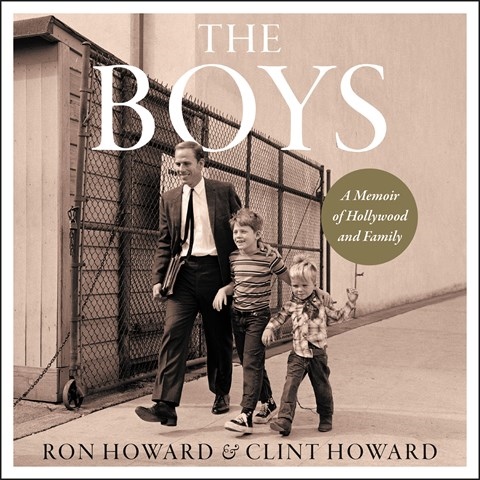 THE BOYS A Memoir of Hollywood and Family

This audiobook is simply a delight. Entertainment icon brothers Ron and Clint Howard share a memoir that never strays far from being a sincere loving tribute to their late Midwest-born parents and grandparents for the values they instilled. With voices bright with high style and that special talent some actors have for making the conversation seem so intimate and direct, the tales of the Hollywood television and film industries of the 1950s, 1960s, and beyond are gently and effectively told. The shared memoir, along with the shared narration, works well, especially with each brother stating his first name each time the reins change hands. An added bonus is the introductory chapter effectively and efficiently read by Ron Howard's daughter, Bryce Dallas Howard. This is a must-listen. W.A.G. Winner of AudioFile Earphones Award, 2021 Best Audiobook © AudioFile 2021, Portland, Maine [Published: OCTOBER 2021]