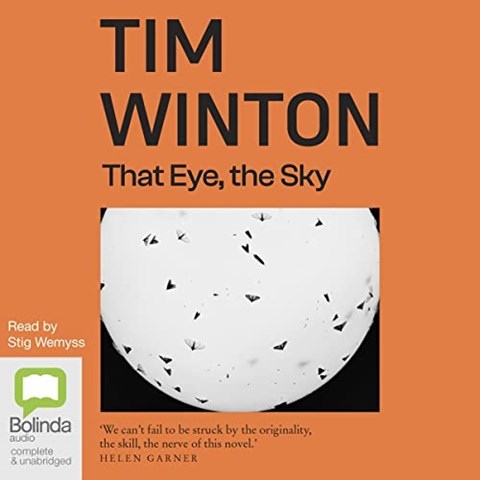 THAT EYE, THE SKY

Stig Wemyss channels every one of the fully realized characters in Tim Winton's 1986 novel. Told from the viewpoint of 12-year-old Morton Flack, the story of a family faced with a devastating accident unfolds during one Australian summer. Wemyss fully voices everyone, whether a primary character or one who is simply passing through. He captures Morton's observations of and interactions with his mother and teen sister, his senile grandmother, and the mysterious man who appears to help them through their time of need, who converts them to an unorthodox form of Christianity and then leaves them with more questions than ever. Wemyss sings where indicated; he becomes both teen girl and middle-aged man in rapid dialogue. Together, he and Winton create a story that allies listeners with Morton through it all. F.M.R.G. Winner of AudioFile Earphones Award © AudioFile 2022, Portland, Maine [Published: AUGUST 2022]