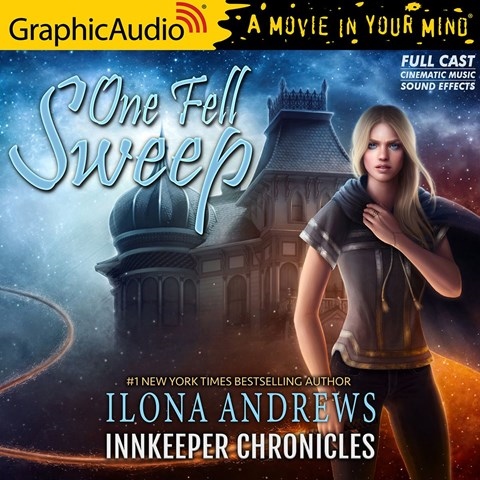 by Ilona Andrews | Read by Nora Achrati and a Full Cast

Nora Achrati takes on two roles in this production: that of narrator and that of Dina Demille, a witchy Texan who runs a magical bed-and-breakfast in a town called Red Deer. This paranormal story is voiced by a full cast who portray the diverse characters: Arland, an aristocratic vampire; Lord Marshal, of House Krahr; Maud, Dina's hard-nosed sister; Helen, a 5-year-old giggly half-vampire; Sean Evans, an ex-military super hot and sultry-voiced werewolf; and others. Dina, Sean, and Arland join forces to battle evildoers who are bent on destroying weaker civilizations, including the inhabitants of Earth. Dramatic sword fights and fistfights are accompanied by music and clever sound effects. These contrast with the inn's tinkling bells and soothing music, which suggest its role as a safe haven. M.B.K. © AudioFile 2022, Portland, Maine [Published: JULY 2022]