Home»Reviews»WHAT SOULS ARE MADE OF 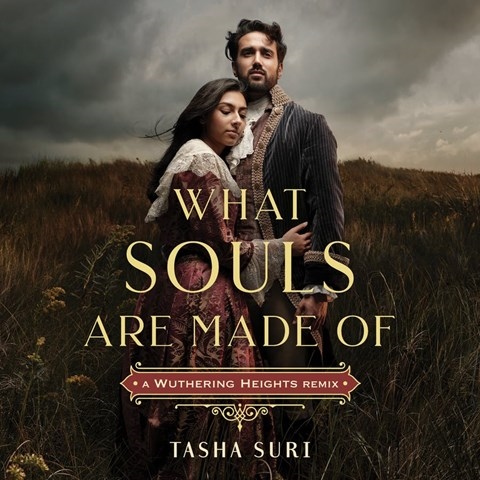 WHAT SOULS ARE MADE OF A WUTHERING HEIGHTS Remix (Remixed Classics, Book 4)

Alex Williams and Becca Hirani give impassioned performances in a captivating retelling of Emily Brontë's WUTHERING HEIGHTS. A dark-skinned "boy from nowhere," Heathcliff, flees the Heights after overhearing Cathy say he's too lowborn to marry her. Williams embodies Heathcliff's hurt and anger as he fights to forge his own life in Liverpool. Cathy feels endless guilt, and Hirani channels all of the character's desperation to escape her weighty obligations, and the past that haunts her family. The narrators' lyrical accents add to the rich atmosphere of the novel. Suri's adaptation gives listeners perspectives on the minds of these two teenagers who are desperately in love, while also delving into their backstories and underscoring the impact of British colonization. A powerful story beautifully told, highly recommended on audio. E.E.C. Winner of AudioFile Earphones Award © AudioFile 2022, Portland, Maine [Published: JULY 2022]