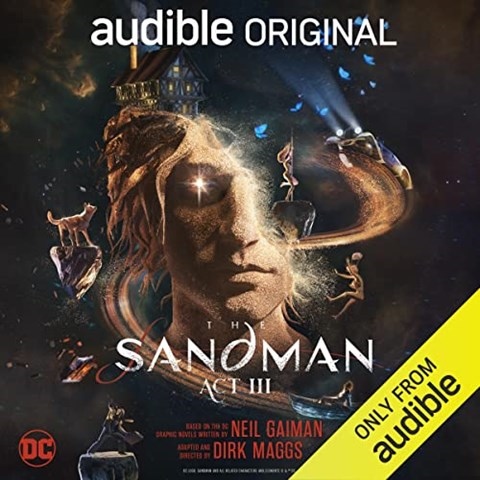 Neil Gaiman lends his enchanting voice to the narration of this acclaimed graphic novel series. This epic drama, written by Gaiman and adapted by audio producer Dirk Maggs, plunges listeners into a fully realized world with dynamic sound effects and impressive vocal performances. James McAvoy flawlessly portrays Morpheus, the Lord of Dreams, as he and Delirium search for their elusive brother, who renounced his role in the Endless. This is followed by a tale of travelers at the Worlds' End who are united by a storm threatening reality and the Endless. Each episode may enlighten, amaze, or appall but will undoubtedly entertain. Standouts amid the five-star cast who illuminate Gaiman's exquisite storytelling are Kat Dennings as Death, David Harewood as Destruction, and Ashleigh Haddad as Ishtar. M.M.W. Winner of AudioFile Earphones Award © AudioFile 2022, Portland, Maine [Published: OCTOBER 2022]