Home»Reviews»MY TEACHER GLOWS IN THE DARK 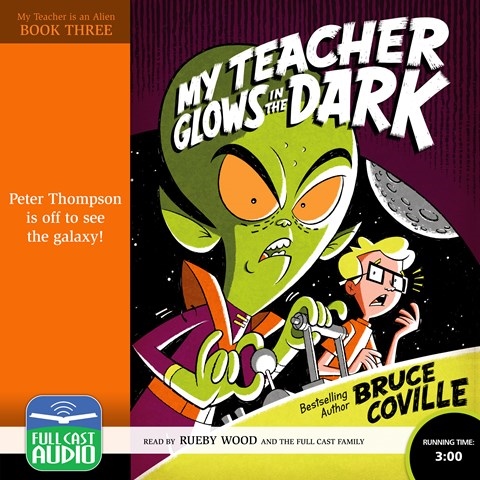 MY TEACHER GLOWS IN THE DARK

Rueby Wood leads the Full Cast Audio team in this sci-fi romp. As first-person narrator Peter Thompson, Emmy nominee Wood ("Better Nate Than Ever") brings the right amount of "gee-whiz" to bear when the sixth grader finds himself on a spaceship teeming with extraterrestrials. They're concerned: Humans are a cruel, violent species on the cusp of interstellar flight, making them a threat to the peaceful denizens of the galaxy. Earth's destruction is definitely on the table. Can Peter talk them out of it? In grand sci-fi tradition, the story braids real-world concerns into the adventure, schooling young listeners in the genre's conventions. Secondary characters are voiced by a smoothly integrated full cast, with some nifty audio effects. A solid introduction for nascent science fiction aficionados. V.S. © AudioFile 2022, Portland, Maine [Published: DECEMBER 2022]