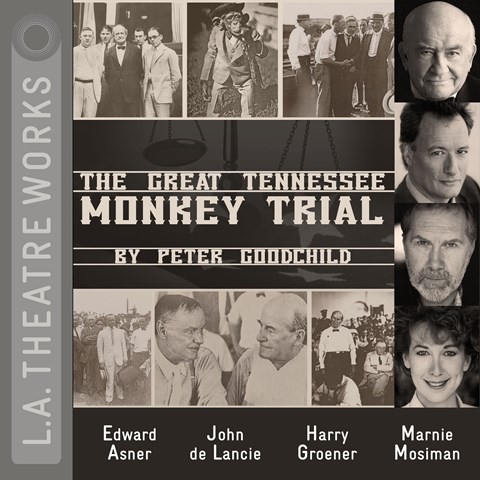 The 1925 trial of science teacher John Scopes was a defining moment in the debate over evolution and creation and the source of some of America’s finest literature and theater. This new theatrical production compares favorably with its esteemed predecessors. With Sharon Gless narrating and providing detailed historical background, the production aims to be historically accurate. At the forefront is Ed Asner, who brings out William Jennings Bryant’s passionate belief in the Bible in a style reminiscent of Fredric March’s in Inherit the Wind. Similarly superb is Jerry Hardin who, as Judge John Ralston, valiantly attempts to maintain order while trying to ensure that Scopes is convicted. Because there are no recordings of the actual trial, this production is certainly the next best thing. D.J.S. Winner of AudioFile Earphones Award © AudioFile 2006, Portland, Maine [Published: DEC 06/ JAN 07]