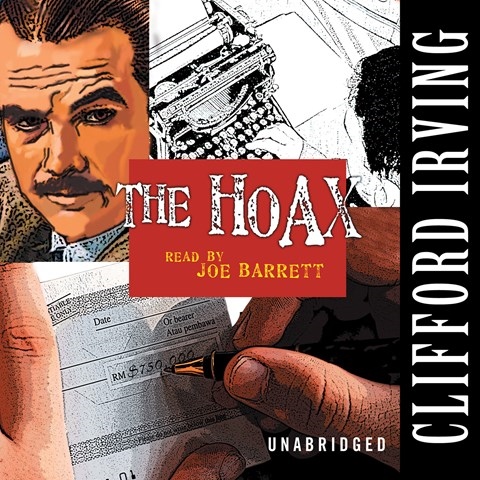 This blockbuster “confessional” by the author of the greatest literary hoax of our time—the “autobiography” of Howard Hughes—was published in Great Britain in 1997 but remained untouched by American publishers until now. When Clifford Irving and his researcher Dick Susskind hatched a plot to write a fake autobiography of the reclusive billionaire, they embarked on a cataclysmic year of double-dealing, corruption, sex, lies, and forgeries. Narrator Joe Barrett is remarkably convincing as the determined author, who finds himself in over his head. Barrett even manages to “sound” fat as Irving’s rotund partner-in-crime, Susskind. The surprise scene-stealer is Irving’s foreign-born, conniving, money-laundering wife, an impeccable portrayal. No matter what the world thinks of Irving, con man extraordinaire, Barrett makes this book about a bogus book as hair-raising, breathlessly paced, and suspenseful as any spy novel. M.T.B. Winner of AudioFile Earphones Award © AudioFile 2007, Portland, Maine [Published: APR/ MAY 07]