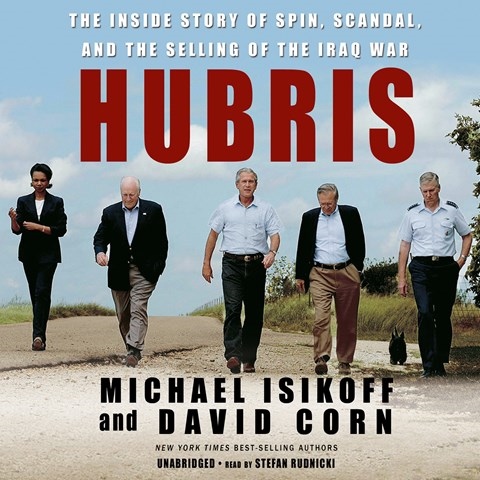 Hubris could be subtitled: “The selling of the 2003 invasion of Iraq to the U.S. public, starring Judith Miller and Valerie Plame.” The authors, both investigative journalists, have condensed political information from the media about the war into a readable capsule. Stefan Rudnicki’s voice goes so deep one might think it’s a recording being played at half-speed. He enunciates each word as though it were as important as all the others, and his unhurried pace allows listeners to concentrate on the audiobook’s content. He doesn’t attempt to imitate the famous characters, but clever pauses highlight the quotes as the text makes it clear who is speaking. This ideal combination of well-written research with a skilled narrator produces a listening experience much greater than the simple sum of its parts. J.A.H. Winner of AudioFile Earphones Award, 2007 Audies Award Winner © AudioFile 2007, Portland, Maine [Published: FEB/ MAR 07]