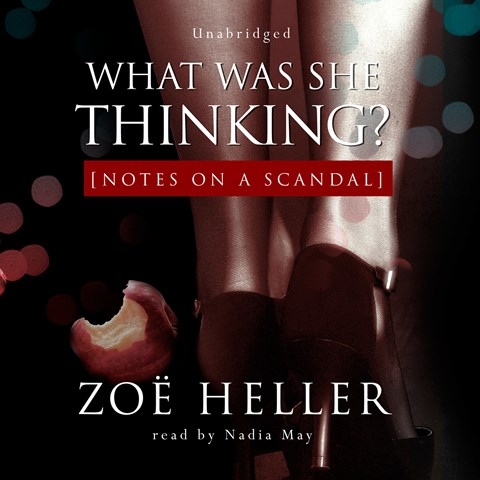 WHAT WAS SHE THINKING?

by Zoë Heller | Read by Nadia May

Barbara Covett, lonely sixtyish London schoolteacher, becomes enthralled with Sheba, a younger fellow teacher. Sheba, married and a mother, has an affair with a 15-year-old student. How Barbara handles this is the meat of this neatly written story. Nadia May IS Barbara—self-deluding, jealous, controlling, snide though always civil. May gives voice to subordinate characters as well. The faithless teenager, Sheba’s bratty daughter, Sheba herself (increasingly desperate as the boy loses interest), the pompous headmaster all come to life to add to what is a sad and riveting story. Dame Judi Dench plays Barbara in the movie (NOTES ON A SCANDAL); it’s difficult to imagine she does it any better than this audio portrayal. J.B.G. Winner of AudioFile Earphones Award © AudioFile 2007, Portland, Maine [Published: APR/ MAY 07]