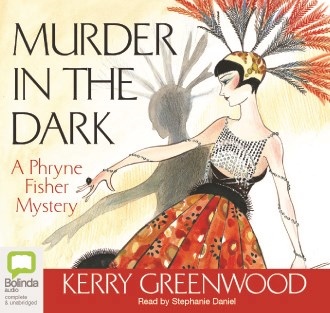 MURDER IN THE DARK

Phryne Fisher is again having a high old time in 1920s Australia, solving crimes, almost getting herself killed, and definitely getting herself into a few liaisons. As always, Stephanie Daniel understands the mix of tight writing, clever plotting, and sheer frivolity that make Kerry Greenwood’s series so enticing. In this installment, Phryne attends “the last best party of 1928,” where three guests are kidnapped and a murderer lurks. Daniel’s reading of Phryne is commanding, sexy, and clever. The secondary characters, from debauched English lords to orphaned children and hearty laborers, also sound exactly right. Finally, the flapper-era music introducing each chapter adds to the charm. One could have listened forever. A.C.S. Winner of AudioFile Earphones Award © AudioFile 2007, Portland, Maine [Published: DEC 07/ JAN 08]