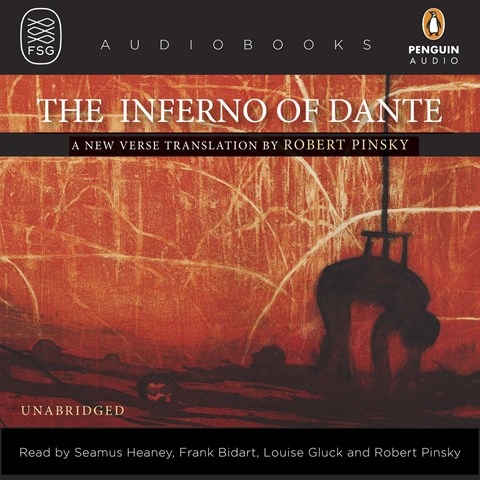 THE INFERNO OF DANTE A New Verse Translation by Robert Pinsky

Pinsky's idiomatic translation, acclaimed as the best in modern English, has already been successfully recorded abridged by John Cleese (Audio Literature) and unabridged by George Guidall (Recorded Books). This new, disappointing unabridged version by four prominent poets, long awaited, illustrates the distance that can occur between a literary achievement and a successful audiobook. Pinsky's gravelly, sibilant voice fits his robust and unmannered translation, and he would have been effective alone. Heaney, too, despite his unmistakable brogue, brings authority to the lines. But Bidart and Glück contribute a coffeehouse flatness that is wholly wrong for Dante's epic scale, and the four voices together defy any logic or continuity. The musical interludes are powerful, and Pinsky's and Heaney's cantos are worth the purchase price; but half a divine comedy is more often comedy than divine in this flawed and strangely mismatched production. D.W. ©AudioFile, Portland, Maine [Published: APR/MAY 99]