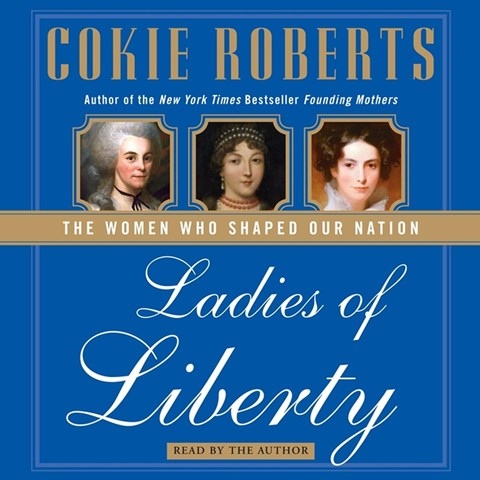 LADIES OF LIBERTY The Women Who Shaped Our Nation

NPR reporter Cokie Roberts pays homage to the heroic women whose patriotism and sacrifice helped create our nation. Roberts spotlights early influential women—heroines, reformers, and visionaries all—including Abigail Adams, Dolley Madison, Sacagawea, Eliza Hamilton, and Martha Jefferson. Narrating with vivid insight, bemused wonder, humor, and a soft Southern accent, Roberts sheds a fresh perspective upon the lives of these strong, brave women, who were captivated by America's birth and political intrigue, even amidst personal hardships. A small weakness is the absence of pauses before and after quotations (mostly from letters), which causes some confusion as to what is a quote and what is text. Overall, though, Roberts is an insightful and passionate reader who delights in her subjects' daily lives, triumphs, outrages, and humor. A.W. 2009 Audies Finalist © AudioFile 2008, Portland, Maine [Published: OCT/NOV 08]