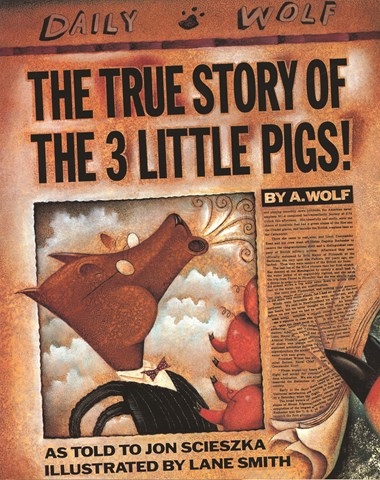 THE TRUE STORY OF THE 3 LITTLE PIGS! By A. Wolf

Convincing one's audience that the well-loved version of a folktale is not to be believed is no easy task. Scieszka re-plots THE THREE LITTLE PIGS with gusto, and Paul Giamatti brings the definitive narration to persuade even the most doubting listener of its veracity. Giamatti's quiet, authoritative voice makes one immediately intimate with Mr. Wolf and eager to hear his account of events. Giamatti takes on the wolf's persona—unflappable and, ultimately, believable. Who would imagine that requesting a cup of sugar from a neighbor could lead to such a misunderstanding of motive, to such a pile of straw and sticks, and to such a misrepresentation in the press? A.R. © AudioFile 2008, Portland, Maine [Published: OCTOBER 2008]