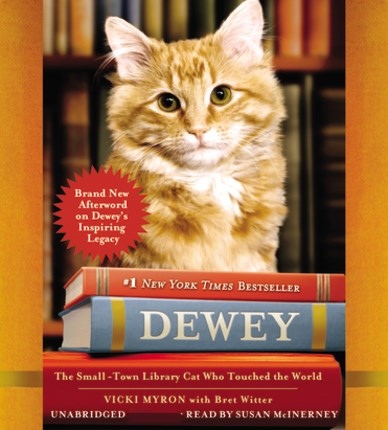 DEWEY The Small-Town Library Cat Who Touched the World

Dewey Readmore Books, the cat found in the book drop on a cold winter morning, put Spencer, Iowa, and its library on the map, with fans as far away as Japan. Suzanne Toren reads librarian Vicki Myron's account of the cat who was a part of the community for 19 years with a librarian's precise enunciation, yet she makes anecdotes about Dewey's love of chasing rubber bands or his one escape from the library touch the heart. Toren's voice remains upbeat while conveying the blend of love, bemusement, and occasional frustration that cat owners will identify with. Listeners—even those without cats of their own—will enjoy getting acquainted with a friendly, mischievous cat who "thought of himself—correctly—as one of a kind." J.A.S. © AudioFile 2008, Portland, Maine [Published: NOVEMBER 2008]