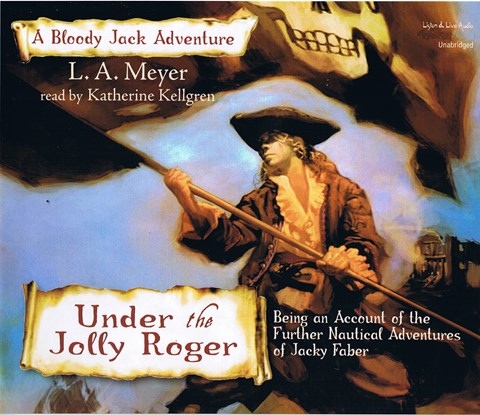 Katherine Kellgren relishes Jacky Faber's escapades in this sequel to BLOODY JACK and CURSE OF THE BLUE TATTOO. This time the female teen orphan resumes male garb as a prank and, as a result, is impressed into the 1800s British Navy. Kellgren portrays the brutal captain who refuses to release the young woman from service and creates humor with the crew’s delightfully exaggerated Irish accents. Kellgren's subtle yet striking transitions as Jacky shifts from pleading damsel to gunnery officer, pirate captain, and brave Navy lieutenant are right on target and move the whirlwind nautical adventures from privateering to the Battle of Trafalgar. The story leaves listeners in breathless anticipation of Jacky's promised return to Boston, where she once attended—without obvious improvement—the Lawson Peabody School for Young Girls. D.P.D. © AudioFile 2009, Portland, Maine [Published: JANUARY 2009]