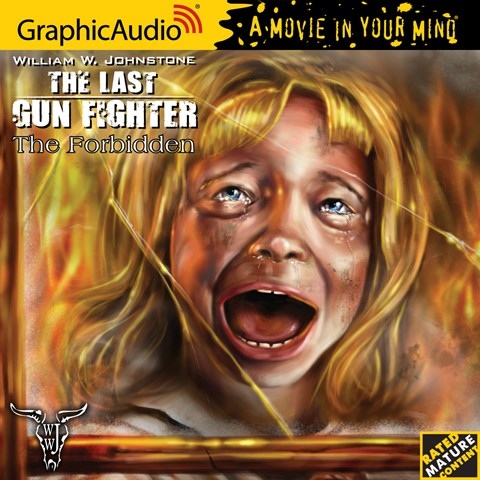 THE LAST GUN FIGHTER 4 The Forbidden

by William W. Johnstone | Read by Ken Jackson and a Full Cast

The latest addition to the Graphic Audio "Movie in Your Mind" series is William K. Johnstone's epic story of revenge in the Old West. Outlaw Frank Morgan wants to find some peace and quiet in his once-busy life but instead finds himself torn between two feuding factions. Featuring remarkable and realistic sound effects and a large cast of talented narrators—including Ken Jackson, Steve Carpenter, Mort Shelby, Nanette Savard, Nathanial Perry, and Richard Rohan—this recording is a rousing adventure that will transport listeners to the Wild West. Bullets whiz past your ears, sandstorms assault your exposed skin, and the sun at high noon seems to radiate heat. Unforgettable listening! L.B. Winner of AudioFile Earphones Award © AudioFile 2008, Portland, Maine [Published: DECEMBER 2008]