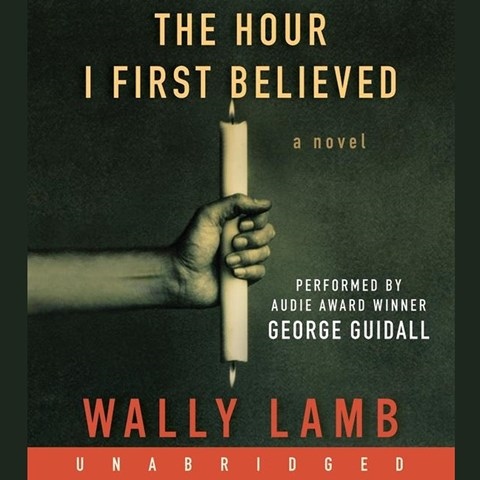 THE HOUR I FIRST BELIEVED

Caelum Quirk is a quirky guy who can't seem to stay married. He's on wife Number 3, and things are rocky. He teaches at Columbine High School, and his wife, Maureen, is the school nurse. Then, tragedy strikes, and Maureen's mental health deteriorates. George Guidall's voice offers safe haven, even as he takes listeners into Columbine's library and hallways during the nightmare. Guidall is particularly chilling while performing segments from the killers' journals, and when Caelum discovers a cache of letters revealing old family secrets, Guidall assumes the diction and personae of the nineteenth century. Wally Lamb's long-awaited novel goes off in many directions—the aftermath of tragedy, women's rights, prison reform, slavery, sexual orientation, faith, and chaos theory. Guidall's performance makes for spellbinding listening. S.J.H. Winner of AudioFile Earphones Award © AudioFile 2008, Portland, Maine [Published: NOVEMBER 2008]