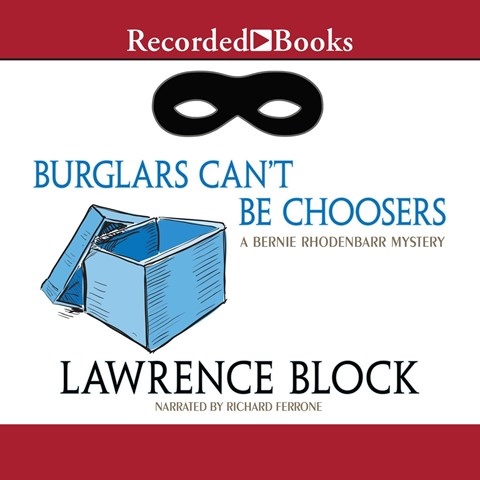 Bernie Rhodenbarr is a crook who limits his criminal enterprise to burglary—carried out to high ethical standards. In BURGLARS CAN'T BE CHOOSERS, Bernie is offered five large ones for a one-hour job that’s a sure thing. All goes well until the victim turns up dead and Bernie is wanted for murder. Narrator Richard Ferrone adjusts his gravelly voice to match Bernie's “nice crook” persona. The story quickly engages listeners but bogs down as the plot thickens, finally closing with Bernie connecting all of the dots and fingering the real killer. Ferrone's delivery has a spark that complements Bernie's clever powers of deduction. Ferrone carries the day with his smooth and steady delivery, laced with just the right touches of humor and vocal variety. T.J.M. © AudioFile 2009, Portland, Maine [Published: APRIL 2009]