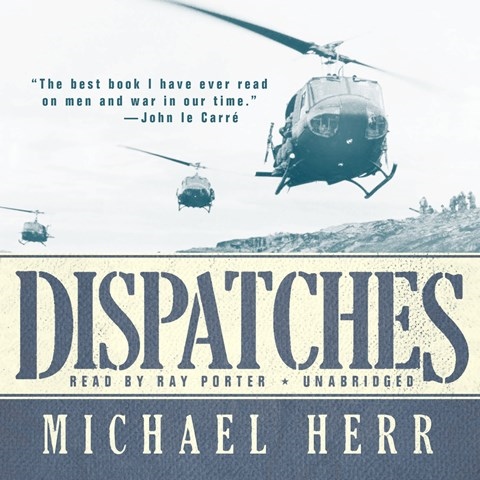 Michael Herr's DISPATCHES—based on his reporting for ESQUIRE magazine—remains one of the seminal texts in our understanding of the American experience in Vietnam. His unblinking, earnest, but absurdist treatment of a hundred landing zones, fire bases, base camps, and Saigon hangouts before and after the Tet Offensive in 1968 is full of powerful images, unforgettable characters, and haunting scenes of violence. Those unfamiliar with the original will recognize its flavor from derivative works like APOCALYPSE NOW and FULL METAL JACKET. Like many '60s classics, DISPATCHES is not long on structure. This lack of structure is no impediment for the listener. Like Homer's ILLIAD, Herr's war stories seem suited to being spoken rather than read. Ray Porter provides the perfect clear, clipped, but not overdramatic narration. Porter's occasional character voices enrich the text without distracting from it. F.C. © AudioFile 2009, Portland, Maine [Published: MAY 2009]