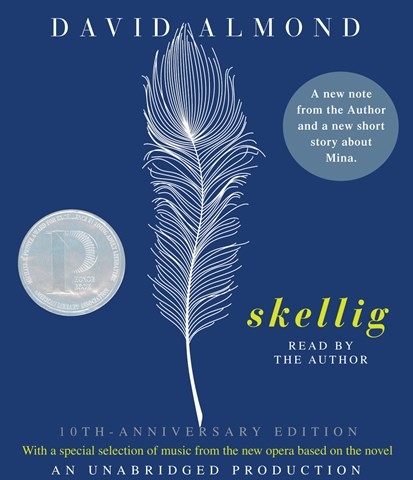 The re-release of David Almond’s audiobook begins with reflections on how his character Skellig inspired the novel a decade ago. This intriguing character and Almond’s energetic reading usher listeners into an enigmatic plot. Who is the near-dead winged creature Michael discovers eating dead flies in the garage of his new home? Almond breathlessly delivers the mounting mysteries as Michael and his new friend, Mina, try to understand and care for the fragile Skellig. The production also includes Jayne Entwistle’s narration of Almond’s short story “Journey to the Archaeopteryx,” a story-within-a-story that takes place as Mina marvels about winged dinosaurs. Two selections from the SKELLIG opera provide musical interpretation of the story at the end of the production. S.W. © AudioFile 2009, Portland, Maine [Published: SEPTEMBER 2009]