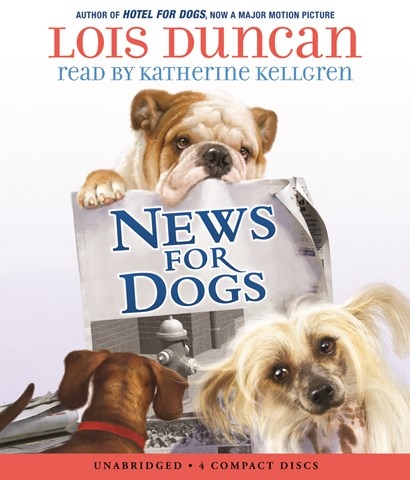 The sequel to Lois Duncan's 1971 book, HOTEL FOR DOGS (which was made into a movie last year), finds Andi and her older brother, Bruce, back again, with three dogs of their own this time. To raise cash to pay off the owner of Bruce's Irish setter, the siblings plan THE BOW-WOW NEWS, a newspaper for the canine set. Thanks to the Internet, their neighborhood project becomes an online sensation. It also seems to be the focus of a couple of “dognappers.” Narrator Katherine Kellgren reads this mystery with the expression and authority of a master storyteller. Her rendering of the kids' Great Aunt Alice, an elderly retired private eye who becomes their staunchest ally, is especially appealing. But even Kellgren can't make listeners like these parents, who whine, yell, and refuse to believe their own kids. Somehow, that makes this story both more fun—and annoying. M.M.C. © AudioFile 2009, Portland, Maine [Published: JULY 2009]