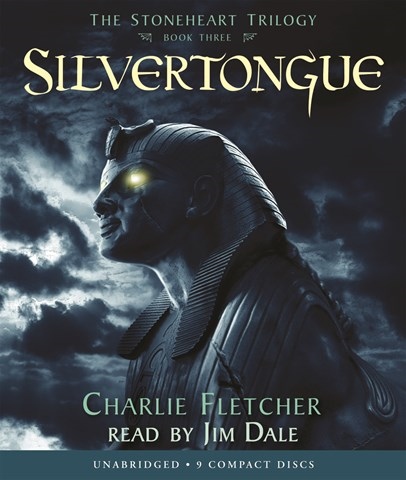 THE SILVERTONGUE The Stoneheart Trilogy, Book 3

This final book in the Stoneheart Trilogy is read masterfully by Jim Dale. While those unfamiliar with Fletcher's first two books may initially feel puzzled when confronted with the author's premise and odd characters (such as the Queen of America, Dictionary, and Gunner), Dale's dynamic narration and his energetic and compelling characterizations help even unfamiliar listeners become quickly invested in this action-packed story. In Fletcher's deeply imagined world, young George and Edie have entered a new reality, where good spits (statues invested with souls) and evil taints (soulless gargoyle carvings) do battle. George is brave and believable, and Edie—with her delightful Scots accent—is charming and engaging. Dale's depictions of others (from rough, loyal WWI soldier Gunner to snarling gargoyles) add texture to a terrific, original story. J.C.G. © AudioFile 2009, Portland, Maine [Published: JULY 2009]