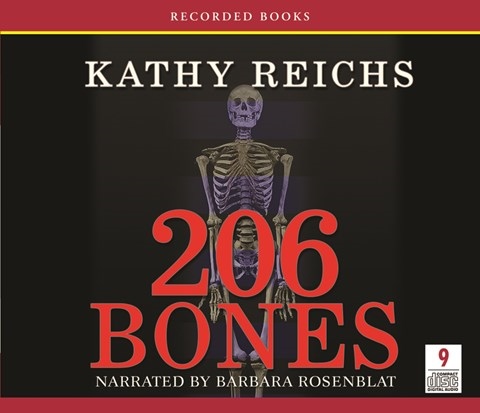 Once again Barbara Rosenblat becomes Tempe Brennan, super forensic anthropologist. From the terror of finding herself buried in a freezing tomb to her coolly analytical behavior sorting through bodies, listeners always hear how she’s feeling. Tempe and her sometimes boyfriend, Ryan, come to Chicago, accompanying the remains of an heiress whose autopsy Tempe is accused of botching. The story requires dramatizing a hilarious dinner with her Latvian-American former in-laws and interactions with fellow medical personnel in Montreal, as well as smoothly delivering French phrases. Rosenblat’s confidential tone and humorous asides will make you think she’s talking just to you. There are 206 bones in the human body and at least that many reasons to enjoy this audiobook. J.B.G. Winner of AudioFile Earphones Award © AudioFile 2010, Portland, Maine [Published: JANUARY 2010]