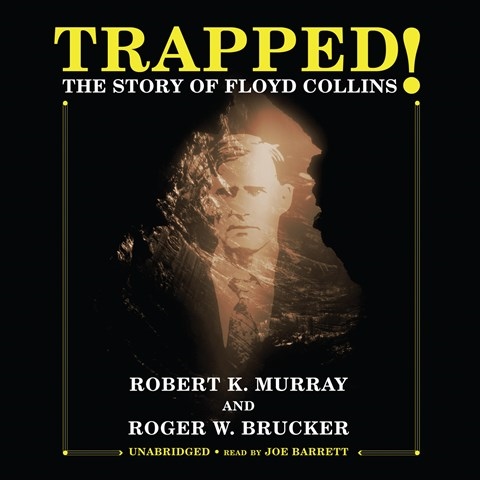 TRAPPED! The Story of Floyd Collins

At the opening of this real-life story, young Floyd Collins's foot becomes trapped under a boulder in a cave he has undertaken to explore alone. Leaving us in suspense, time regresses to provide the dramatis personae and historical information that lead up to the cliff-hanging moment, which was one of the biggest news stories between the two World Wars. The return to 1925 finds Floyd still stuck, and efforts to free him don't go well. Narrator Joe Barrett's sandy voice alternates between his normal speech and the rural accent of central Kentucky, where the story takes place. Barrett amplifies the suspense by modulating his intensity in synchrony with the hero’s vicissitudes. He imitates Floyd's pitiful cries for help and food as the boy drifts to the far edge of sanity. Floyd's uncertain fate makes the true story difficult to pause. J.A.H. Winner of AudioFile Earphones Award © AudioFile 2010, Portland, Maine [Published: JUNE 2010]