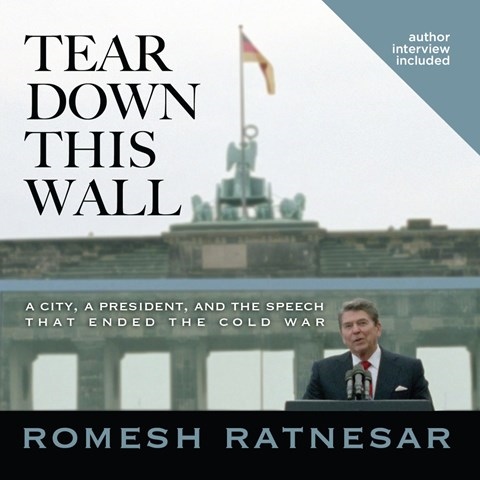 TEAR DOWN THIS WALL A City, a President, and the Speech That Ended the Cold War

One of the climactic moments of the twentieth century, the fall of the Berlin Wall marked a period of new hope and freedom, the end of the Cold War. Reporter Romesh Ratnesar recounts details of the negotiations between the Reagan administration and the Soviet Union that led up to the reunification of Berlin. He specifically covers Reagan's famous speech at the Brandenburg Gate. The production opens with an insightful interview between narrator Wes Bleed and Ratnesar in which the author discusses his motivation for writing the book. Following this discussion is a recording of Reagan's speech and then the text itself, which Bleed narrates with vigor and alacrity. His clear, friendly voice suits the book’s historical tone. Further, his reading captures the feelings of hope and determination that prevailed during this critical period in history. D.M.W. © AudioFile 2010, Portland, Maine [Published: APRIL 2010]