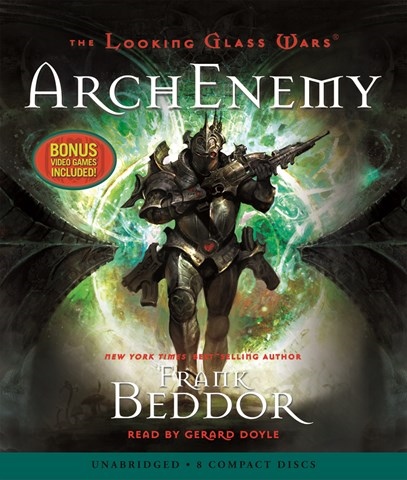 Anyone looking for the next Harry Potter can stop looking—THE LOOKING GLASS WARS is here. ARCHENEMY is the third installment of Frank Beddor's reimagined story of ALICE IN WONDERLAND. (This description does not do justice to the wealth and scope of the novel.) And though Jim Dale set the audiobook bar impossibly high with his Harry Potter narrations, performer Gerard Doyle clearly has the master in his sights with his compelling impressions of hookah-smoking caterpillars, the twin-voiced General Doppelganger, and the albino Bibwit Harte (an anagram for White Rabbit). Doyle's skill at bringing the characters to vivid life elevates the novel to audio theater. Close your eyes and listen to the battle for the very existence of Alice, Wonderland, and imagination itself. And smile. M.S. Winner of AudioFile Earphones Award © AudioFile 2009, Portland, Maine [Published: NOVEMBER 2009]